IUI is the most commonly performed procedure in Assisted Reproduction. It was great to be a part of history in making it the modern procedure it is today.

First, let’s review why IUI would be necessary. The cervical mucus is a natural, necessary filter used to allow safe and invigorating passage of the spermatozoa in the uterus towards the site of fertilization in the fallopian tubes. The quality of the mucus is not always optimal and can even be hostile to any penetration. The quantity and quality of sperm can be inadequate, making it impossible to reach or overcome the cervical passage. Semen analysis and post-coital tests* can help us interpret such a deficiency in the conception process.

Artificial insemination has been practiced for many centuries. Up until the late nineteen eighties, the whole semen was placed in the vagina near the cervix, using a small syringe or inserted into a plastic cap and applied on the cervix like a diaphragm. Semen has two components: spermatozoa and seminal plasma. The seminal plasma contains many ingredients necessary for the voyage from the male genital tract into the vagina. Among its components we find prostaglandins, which can cause severe uterine contractions, infections and deadly anaphylactic shock if inserted directly into the uterus. This is why it was inconceivable to insert semen directly into the uterus.

Although the first IVF baby was born in 1978, assisted reproduction was still in its infancy. The same year, a major event that would change the way to treat infertility occurred in my practice. In our Endocrinology Lab, my friend John Black** Ph.D., was working on adapting a veterinarian technique to separate X-bearing and Y-bearing spermatozoa to human sperm (The Ericsson Method for Gender Selection***). While the attempt to use it for sex selection was not successful, it gave John and I a wonderful idea.

The spermatozoa were being separated from the seminal plasma using albumin gradients and re-suspended in a sterile physiologic medium, similar to the natural liquid environment found in the uterus. Thanks to the new process of separation and filtration, we could think about bypassing the cervical obstacle or barrier.

I designed the first IUI catheter using a tuberculin syringe, a sawed off 18gauge needle and a #6french red rubber catheter. It was easy to use and could be sterilized in our office. I performed IUI in all my infertile couples having normal semen analysis and who had failed the post-coital test. We obtained very encouraging results.

Now, IUI is the most commonly performed procedure in Assisted Reproduction, everywhere around the world. These days, most clinics use disposable, specially manufactured plastic catheters that have been sterilized with ionizing radiations (gamma rays). I am proud to be a pioneer in fertility treatments. 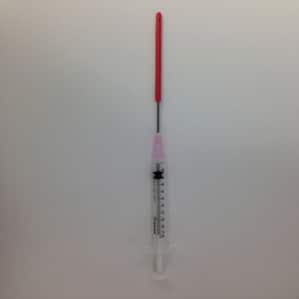 *Post-Coital test: It is also called Sims-Huhner test and dates back to 1866. It used to be performed extensively but for obscure reasons it is not popular anymore in Reproductive Endocrinology. In our clinic, we feel that if a patient has a normal post-coital test, normal mucus and normal sperm passage, there are no reasons to submit her to IUI, preventing unnecessary expenses.

**John Black Ph.D.: Doctor in Biology and Endocrinology. University professor. He was recently President of East Georgia College (2004-2011) and is currently serving as the Interim President of Middle Georgia State College.

***Ericsson Method: Gender selection technique based on the idea that Y sperm are lighter and swim faster than the heavier X sperm. It was patented by Ronald Ericsson Ph.D. in 1976. Our laboratory confirmed the separation in vitro but it was never complete. We could not do better than 80% Y/20% X and as far as offspring was concerned, the results were 50% boys/50% girls in 30 pregnancies for families wishing for a boy. Although some clinics are still advertising for it, we have not pursued the use of the Ericsson Method after our original study.

E.J. Servy and J.B. Black. Results of a self-limited experience in insemination after separation of X and Y spermatozoa for sex preselection. 7th Annual Meeting of the American Society of Andrology – Hilton Head SC, February 23, 1982.